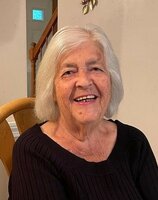 Joann K. (Mulone) Thomas, 86, passed away peacefully on Wednesday Evening, July 13. She was the beloved wife of Edward L. Thomas. Born in East Boston and raised in Medford, Joann was the daughter of the late Giacomo, and the late Katherine (Stellato) Mulone. Joann and Edward enjoyed 66 years of marriage. They lived in Medford before making their home in Woburn in 1961. Prior to her retirement, Joann worked as an executive secretary for BayBank. She was a member of the Mystic-Wellington Yacht Club, and she and Edward loved spending winters in Cocoa Beach, Florida. Joann enjoyed cooking, baking, and entertaining. And most of all, she loved spending time with her family at home in Woburn. In addition to her husband Edward, Joann is survived by four daughters; Debra Valente and son-in-law Alan Valente of Woburn, Cheryl Barrett and her husband Joseph of Billerica, Susan Wells and her husband Kevin of Hampton, NH, and Patricia Piazza and her husband Angelo of Woburn. She is also survived by eight grandchildren, Alan James Valente and his companion Cathy, Alexander Valente and his fiancée Andrea, Nicholas Barrett and his wife Danielle, Jillian Breithaupt and her husband Drew, Kevin Wells and his wife Elana, Laura LeBlanc and her husband Andrew, Brenton Piazza, and Heather Piazza; and three great grandchildren, Ryan, Jake, and Jaxx Wells. She is further survived by one brother, Jack Mulone of Cocoa Beach, FL; and several nieces and nephews. Visiting hours will be at the Graham Funeral Home, 3 Arlington Rd., Woburn on Tuesday, July 19 from 4-8 pm. The funeral will be held from the funeral home on Wednesday, July 20 at 9:00 am, followed by a Funeral Mass at St. Anthony’s Church, 851 Main St., Woburn at 10:00 am. Burial will be at the Woodbrook Cemetery in Woburn. Contributions in Joann’s memory may be made to the Alzheimer’s Association, 309 Waverly Oaks Rd. Waltham, MA 02452 (www.alz.org)