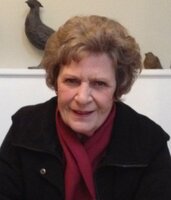 Judith L. (Blanchard) Brady, 81, of Woburn, passed away at her home on Saturday morning, June 25. She was the loving wife of the late Robert A. Brady who passed away just last month. Judith was one of seven children of the late Robert L., and the late Elizabeth G. Blanchard. She grew up in Wilmington, and lived there until marrying her late husband Bob and coming to Woburn in 1960. For many years, Judith had worked as a cashier for Star Market Supermarkets. Judy was an exceptional wife, mother, grandmother, and friend. She was always the first to offer help to family, friends and neighbors. She loved her children and grandchildren deeply. Helping care for several grandkids during pre-school years, Judy created a magical home filled with love, laughter, and creativity. Always at the ready to help mend a stuffed animal or doll in need of medical assistance, whip up a special dress for an event, bake cookies and make play dough from scratch all while gathering gently loved toys from the secondhand stores to add to the toy box collection monthly. She was the best Gram ever! Judith is survived by one son, Robert A. Brady, Jr. and his wife Helen of Concord; one daughter, Allyson Paladino and her husband John of North Reading; and four grandchildren, Kiersten Brady, Erin Brady, Caroline Brady, and Robert A. Brady, III. She is also survived by two sisters, Janice Regan and her husband José Gonzales of Woburn, Joyce Goodberry and her husband Jerry of Farmington, NH; and one brother Paul Blanchard and his wife Brenda of Sanbornville, NH; and several nieces & nephews. In addition to her late husband Bob, Judith was also preceded in death by two sisters, the late Jean Swain and the late Joan Poplowski; and one brother, the late Robert Blanchard. A graveside service will be held at the Woodbrook Cemetery, 100 Salem St., Woburn on Saturday, July 9 at 11:00 am. In lieu of flowers, contributions in Judith’s memory may be made to the Tunnel to Towers Foundation, 2361Hylan Blvd., Staten Island, NY 10306. Arrangements by the Graham Funeral Home, Woburn.