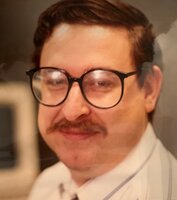 Keith Hoxie, of Woburn, formerly of Nashua, New Hampshire, passed away at his home on June 2, 2022. He was 66 years of age. Born in Auburn, New York, he was the son of the late Kenneth, and the late Shirley Hoxie. Keith was a graduate of the University of Lowell, with a degree in Mathematics. Keith was a master at playing chess, his brothers could never beat him. He was a brilliant man, who taught himself how to solve the Rubik’s Cube long before the Internet or Google. Prior to his retirement, he worked as a software developer for Engineering and Information Technology. In addition to his parents, Keith was preceded in death by one brother, the late Kevin Hoxie. He is survived by his brother, Kenton Hoxie and his wife Karin of Odenton, Maryland; and their six children and four grandchildren. Keith is also survived by his sister-in-law Chris Micco; and her daughter. Graveside services will be held at the Edgewood Cemetery at a later date. In lieu of flowers, contributions in Keith’s memory may be made to the American Heart Association, P.O. Box 417005, Boston, MA 02241 (www.heart.org) Arrangements by the Graham Funeral Home, Woburn.